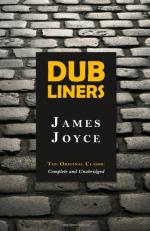 Dubliners - Research Article from Literature and Its Times

James Joyce
This encyclopedia article consists of approximately 12 pages of information about Dubliners.

James Augustine Joyce, who revolutionized English literature with his shocking language and literary style, was born February 2, 1882, in a Dublin suburb. The oldest son in a Catholic family of ten children, Joyce was educated largely by the Jesuits. At sixteen, the young man considered entering the priesthood but realized that celibacy was not for him. Shortly thereafter he made an abrupt about-face and rejected the church entirely, although it dominated his imagination for the rest of his life. He rebelled against his Catholic upbringing and against the domestic politics of his native land, leaving Dublin for the European continent in 1904 and never returning. Joyce's fiction, including Dubliners, dismantles and critiques middle-class Irish Catholic society, questioning marriage, faith, and nationalism.

Events in History at the Time of the Short Stories

Ireland and England. Even though Joyce claimed to be disgusted by its cultural paralysis and its...

Dubliners from Gale. ©2008 Thomson Gale, a part of the Thomson Corporation. All rights reserved.