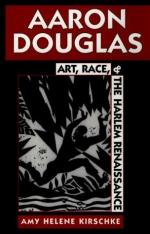 This encyclopedia article consists of approximately 12 pages of information about Douglas, Aaron.

One of the most notable figures in African American art, Aaron Douglas was especially active during the Harlem Renaissance, and he is often referred to as the period's "official artist." His distinctive style of geometric symbolism (featuring flat silhouettes of human figures, muted colors, and images that are symbolic, not realistic) may be seen on many magazine covers, book illustrations and dustcovers, and advertisements from the Harlem Renaissance. Douglas also painted some impressive murals (large-scale paintings, often mounted in public places) that display his unique blend of African and modernist techniques and his interest in including elements of African American history, religion, myth, and social issues in his works. Before Douglas, no African American artist...

More summaries and resources for teaching or studying Douglas, Aaron.