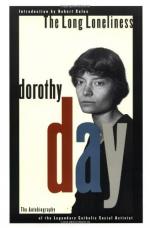 This encyclopedia article consists of approximately 7 pages of information about Dorothy Day.

Dorothy Day remains one of the most highly regarded social activists in the history of the United States. After converting to Catholicism, she lived a life of voluntary poverty and community service. Since the 1930s the Catholic Worker movement Day founded has provided relief to untold numbers of poor and homeless people. Day’s dedication to peace was unfailing; she protested armed conflict during two world wars and encouraged draft card burning during the Vietnam War (1954–75). In the wake of Day’s death there has been a campaign to canonize her as a saint.

Daughter of a journalist

Day was born on November 8, 1897, in Brooklyn, New York. When she was six years old her family moved to San Francisco, California, where her father, a...

More summaries and resources for teaching or studying Dorothy Day.