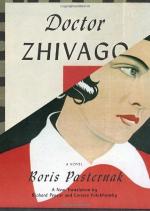 This only novel by the famed Russian poet Boris Pasternak received the 1958 Nobel Prize for literature. The story traces the experiences of a Moscow doctor, Yuri Zhivago, during the Russian Revolution of 1917 and the ensuing civil war from 1918 to 1921. Zhivago's independence, religious convictions, and conflict with the Soviet regime were considered too controversial for publication by the editors of the leading Soviet literary journal, Novy Mir, to which Pasternak had submitted his work, despite the fact that the Soviet Union was experiencing greater openness following the death of dictator Joseph Stalin in 1953. Pasternak had the manuscript smuggled out of the Soviet Union in late 1956, and it was first published in Italy in November 1957. The book was translated into more than twenty languages in the next two years and became an international best-seller. A 1965 film adaptation of the book, directed by David Lean, received five Academy Award nominations.

Doctor Zhivago from Gale. ©2005-2006 Thomson Gale, a part of the Thomson Corporation. All rights reserved.