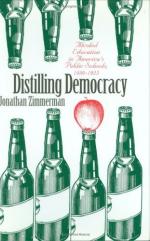 This encyclopedia article consists of approximately 2 pages of information about Distillation.

Distillation is the process of purifying liquid compounds on the basis of different boiling points or the process of separating liquids from compounds that do not vaporize. Since the actual process causes liquids to precipitate in a wet mist or drops that concentrate and drip, the word derives from the Latin de (from, down, away) + stillare (to drip).

In the simplest form of distillation, saltwater can be purified to yield freshwater by steam distillation, leaving a residue of salt. Distillation is also the process by which alcohol (ethanol, also called ethyl alcohol) as liquors or spirits, are separated from fermenting mashes of grains, fruits, or vegetables. When this process is used to distill alcohol, it is based on the following: Ethyl alcohol (C2H6O) has a lower boiling point than does water (78.5°C versus 100°C), so alcohol vapors rise first into the condenser, where cool water circulates around the outside of the condenser, causing the alcohol vapors to return to liquid form and drop into the collection flask. The purity of the distillate can be increased by repeating the process several times.

About 800 A. D., the process of distillation was evolved by the Arabian alchemist Jabir (or Geber) ibn Hayyah. He may also have named the distillate alcohol, since the word derives from an Arabic root, al-kuhul, which refers to powdered antimony (kohl) used as an eye cosmetic in the Mediterranean region; with time and use it came to mean any finely ground substance, then the "essence," and eventually, the essence of wine—its spirit, or alcohol. It came into English from Old Spanish, from the Arabic spoken by the Moors of the Iberian peninsula during their rule there (750-1492 A. D.).

More summaries and resources for teaching or studying Distillation.

Distillation from Macmillan. Copyright © 2001-2006 by Macmillan Reference USA, an imprint of the Gale Group. All rights reserved.