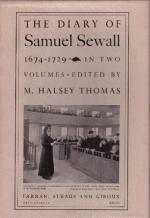 This encyclopedia article consists of approximately 6 pages of information about Diary Entries of Samuel Sewall by Samuel Sewall.

Both reprinted in Early American Writing in 1994

Samuel Sewall (1652–1730; see biography entry) was a prominent Boston businessman who served on the panel of judges for the Salemwitch trials. He is best known today for his diary, which provides an eyewitness account of the internal workings of the procedings. The trials were conducted by a group of elite Puritan leaders who were convinced that they were following the will of God. Sewall was a member of that group. Selected diary entries from April, August, and September 1692—at the height of the trials—show that judges and other Puritan officials regularly consulted about strategy, and they were determined to obtain confessions from suspected witches. Yet they were also anxious to justify their decisions. For instance, interrogators piled...