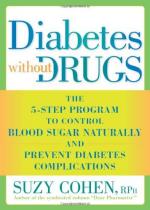 This encyclopedia article consists of approximately 2 pages of information about Diabetes, Genetic Factors.

In IDDM, the pancreas does not make enough insulin. Insulin is a hormone that signals fat, muscle, and liver cells (target cells) to take glucose from the blood plasma into the interior on the cells to be used for cellular respiration. Individuals with IDDM must take insulin to manage their blood glucose levels. Studies with twins have shown that concordance for IDDM (the occurrence of IDDM in both individuals) is minimal, therefore the inheritance factor for IDDM is small. Researchers believe that both environmental factors and viral antigens are responsible for IDDM.

NIDDM is associated with obesity and aging, and has a concordance in twin studies of 80-90%, suggesting a strong genetic component. In this type of diabetes, the glycoprotein receptor sites for insulin on the outer surface of the membrane of target cells do not respond to the presence of insulin and so glucose is not taken up into the cells. Blood glucose levels remain high leading to hyperglycemia and eventually glucose toxicity and death. If diagnosed in the early stages of the disease, NIDDM can be managed with diet and exercise.

Genetic studies using Admixture Linkage Analysis have found that NIDDM is genetically complex, involving multiple genes, and multiple gene-environment interactions. The fact that NIDDM was not recognized 100 years ago suggests environmental factors may have created the disease. Further indications of an environmental component to the disease can be found in a four-fold increase in NIDDM in Navajo and Pueblo children since 1990. It is hoped that on-going linkage analyses will find primarily related diabetes genes or modifying genes such as obesity-related genes.

Ethnic groups such a Native North Americans and Hispanics show much higher incidences of diabetes than other ethnic groups. This suggests a genetic susceptibility to NIDDM that may have evolved as a survival mechanism when these populations historically experienced cycles of feast and famine. There may have been a selective advantage in having a genotype that conserved blood sugar during times of famine. A human genome-wide search has revealed a major susceptibility locus for NIDDM on the distal part of the long arm of chromosome 2 that has been called NIDDM1.

Diabetes, Genetic Factors from Gale. ©2005-2006 Thomson Gale, a part of the Thomson Corporation. All rights reserved.