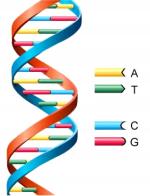 This encyclopedia article consists of approximately 1 page of information about Deoxyribose Nucleic Acid.

Deoxyribose nucleic acid (DNA) molecules contain genetic information that is the blueprint for life. DNA is made up of long chains of subunits called nucleotides, which are nitrogenous bases attached to ribose sugar molecules. Two of these chains intertwine in the famous double helix structure discovered in 1953 by James Watson and Francis Crick.

The genetic information contained in DNA molecules is in a code spelled out by the linear sequence of nucleotides in each chain. Each group of three nucleotides makes up a codon, a unit resembling a letter in the alphabet. A string of codons effectively spells a word of the genetic message.

This message is expressed when enzymes (cellular proteins) synthesize new proteins using a copy of a short segment of DNA as a template. Each nucleotide codon specifies which amino acid subunit is inserted as the protein is formed, thus determining the structure and function of the proteins. Because the chains are very long, a single DNA strand can contain enough information to direct the synthesis of hundreds of different proteins. Since these proteins make up the cell structure and the machinery (enzymes) by which cells carry out the processes of life, such as synthesizing more molecules including more copies of the DNA itself, DNA can be said to be self-replicating. When cells divide, each of the new cells receives a duplicate set of DNA molecules giving them the necessary information to live and reproduce.

Deoxyribose Nucleic Acid from Gale. ©2005-2006 Thomson Gale, a part of the Thomson Corporation. All rights reserved.