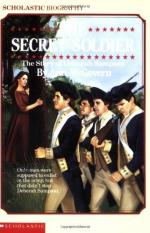 This encyclopedia article consists of approximately 10 pages of information about Deborah Sampson.

"Wrought upon … by an enthusiasm and frenzy … did I throw off the soft [clothing] of my sex, and assume those of the warrior."
Portrait: Deborah Sampson. Reproduced by permission of the Rhode Island Historical Society/Women in Military Service Memorial Foundation.

Disguised as a man, Deborah Sampson served admirably as a soldier in the Continental army during the American Revolutionary War (1775–83) and later gave speeches about her time in the military. She established a public presence for women that went far beyond the normal cultural limits of her time. The former soldier then went on to become a wife and mother. She asked for and received a military pension (money benefits) from the U.S. government, also unheard of for a woman of her time.

More summaries and resources for teaching or studying Deborah Sampson.

Deborah Sampson from UXL. ©2005-2006 by U•X•L. U•X•L is an imprint of Thomson Gale, a division of Thomson Learning, Inc. All rights reserved.