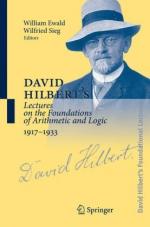 David Hilbert - Research Article from Science and Its Times

This encyclopedia article consists of approximately 3 pages of information about David Hilbert.

Perhaps the most famous event from the long and fruitful career of David Hilbert was his 1900 address to the International Congress of Mathematicians (ICM) in Paris. A new century was dawning, and Hilbert, at 38 already well known, proposed a set of 23 problems. These problems, he suggested, would keep mathematicians occupied throughout the coming century and, indeed, some did. But long before the century had reached its midway point, Hilbert's brilliant career had peaked and entered a headlong dive—another casualty of the political nightmare unfolding in Hitler's Germany.

Hilbert was born on January 23, 1862, in Königsberg, Prussia (now Kaliningrad in Russia). His father, Otto, was a lawyer, and his parents were protective of their social standing. This fact would become clear years later, when they expressed their disapproval of Hilbert's friendship with fellow mathematician Hermann Minkowski (1864-1909), who not only came from the...

More summaries and resources for teaching or studying David Hilbert.

David Hilbert from Gale. ©2005-2006 Thomson Gale, a part of the Thomson Corporation. All rights reserved.