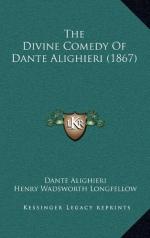 Dante Alighieri - Research Article from Science and Its Times

This encyclopedia article consists of approximately 1 page of information about Dante Alighieri.

Italian poet who in his Divine Comedy (1308-21) popularized ideas on geometry and astronomy. Perhaps the most significant literary work of the later Middle Ages, the Divine Comedy is an allegory representing the poet's journey through Hell, Purgatory, and Paradise, with the Roman poet Virgil serving as guide through the first two locales, and the last guided by Beatrice Portinari, a woman of Dante's native Florence toward whom he cherished an ideal love. The book is a compendium of medieval thought, featuring figures and ideas from the preceding three millennia of Western civilization. In choosing to compose it in Italian rather than Latin, Dante established the foundations of Italian literature and, indeed, all modern Western vernacular literatures. Like everything else about the work, the scientific underpinnings are exceedingly complex, drawing on the cosmological ideas of Ptolemy and others. In the realm of geology, Dante used notions developed by Ristoro d'Arezzo, who wrote that mountains are created by the stars' upward pull on the Earth.

More summaries and resources for teaching or studying Dante Alighieri.

Dante Alighieri from Gale. ©2005-2006 Thomson Gale, a part of the Thomson Corporation. All rights reserved.