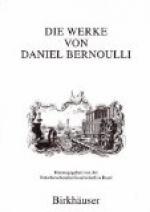 Daniel Bernoulli - Research Article from Science and Its Times

This encyclopedia article consists of approximately 2 pages of information about Daniel Bernoulli.

Daniel Bernoulli belongs to that rarefied upper echelon of mathematicians and scientists for whom distinctions between disciplines are largely academic. Trained as a mathematician, he is best known for the application of his ideas to physics as expressed in Bernoulli's principle, which concerns the inverse relationship of pressure and velocity in fluids. Numerous and groundbreaking as his contributions in the field of hydrodynamics were, however, these were far from the full range of the discoveries made by a genius whose work explored realms as diverse as probability, medicine, and music.

Throughout his life, Bernoulli would be locked in competition with his father Johann (1667-1748), professor of mathematics at the University of Groningen in the Netherlands when Bernoulli was born. As he became aware of his second son's great talents, Johann would become increasingly jealous...