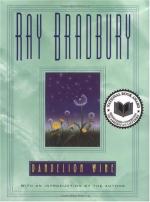 Dandelion Wine - Research Article from Literature and Its Times

Ray Bradbury was born in Waukegan, Illinois, in 1920. Although he had moved to os Angeles, California, by the time he was twelve years old, he retained vivid memories of life in his small Midwestern birthplace. By focusing on Waukegan's nearly rural atmosphere and ignoring the bustling activities of the lakeport town, Bradbury used it as inspiration for the fictional community of Green River, where his novel Dandelion Wine is set.

The 1920s. World War I had occupied America's attention since 1914 and, though the fighting ended in 1918, the war would not reach its final conclusion for the United States until the Treaty of Berlin was ratified in 1921. Three hundred thousand American soldiers returned from Europe to swell the ranks of industrial workers and consumers. Following a short period of adjustment, America began to apply...

More summaries and resources for teaching or studying Dandelion Wine.

Dandelion Wine from Gale. ©2008 Thomson Gale, a part of the Thomson Corporation. All rights reserved.