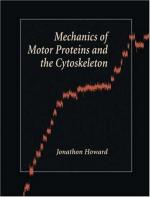 This encyclopedia article consists of approximately 1 page of information about Cytoskeleton.

Eukaroytic cells (those with a membrane-enclosed nucleus) have a great variety of complex shapes and are able to carry out coordinated and directed movement due to a complex, dynamic, internal scaffolding of proteins called the cytoskeleton. Many different types of proteins make up this three-dimensional structure, which usually extends throughout the cell interior. The main components of this apparatus are microtubules (stiff, hollow rods about 25 nanometers in diameter made of tubulin), microfilaments (thin, flexible, double-stranded helical polymers around 5 nanometers in diameter made of globular actin molecules), and intermediate filaments (tough, strong filaments 10-11 nanometers in diameter composed of a family of insoluble proteins including keratin, vimentin, desmin, neurofilament proteins, and nuclear lamins. The cytoskeleton is connected by linker proteins to both the plasma membrane enclosing the cell as well as to organelles within both the nucleus and the cytoplasm. Other proteins known as molecular motors (such as dynein and myosin) are able to ratchet along the cytoskeleton to change cell shape as well as to move components around within the cell.

Some of the movements generated by elements of the cytoskeleton can be seen in the light microscope. For example, localized contraction of the actin network around the cell periphery creates hydrostatic pressure that results in cytoplasmic streaming in large cells such as amoeba. Similarly, microtubules attached to chromosomes during cell division slide past others anchored to centrisomes and centrioles creating the movement that separates genetic material during mitosis and meiosis. The importance of these structures can be demonstrated with chemical or physical treatments that disrupt them. Both cell organization and metabolism are disturbed by these treatments.

More summaries and resources for teaching or studying Cytoskeleton.

Cytoskeleton from Gale. ©2005-2006 Thomson Gale, a part of the Thomson Corporation. All rights reserved.