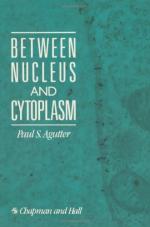 This encyclopedia article consists of approximately 1 page of information about Cytoplasm.

Cytoplasm (also called protoplasm) is the fluid or semi-solid medium enclosed by the outer cellular or plasma membrane and outside the cell nucleus. Basically an aqueous solution rich in proteins, carbohydrates, lipids, nucleic acids, and salts, the cytoplasm is the environment within which all the reactions of cellular metabolism take place. In many cells, the cytoplasm is in constant motion, transporting materials from one place to another. One of the best places to see this is in slime molds, protozoa, and certain algal species, where an ordinary light microscope shows streams of cytoplasm coursing through cell interiors.

One of the most interesting features of cytoplasm is its ability to change from a liquid (or sol) state to semisolid (or gel) state. This transition is brought about by polymerization of microtubules, microfilaments and other elements of the protoplasm cytoskeleton. Contraction of these cytoskeletal elements generates hydrostatic pressure that causes streaming of the liquid phase of the cytoplasm. Movement of molecular motors such as dyein along the elements of the cytoskeleton also helps move materials through the cytoplasm.

In addition to dissolved compounds, the cytoplasm also contains a wide variety of organelles. Among the prominent membrane-bound cytoplasmic organelles are mitochondria, chloroplasts, the endoplasmic reticulum, and the Golgi apparatus. Some macromolecular structures, such as ribosomes, centrioles, microtubules, and microfilaments, could also be considered cytoplasmic organelles.

More summaries and resources for teaching or studying Cytoplasm.

Cytoplasm from Gale. ©2005-2006 Thomson Gale, a part of the Thomson Corporation. All rights reserved.