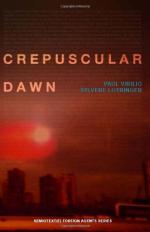 This encyclopedia article consists of approximately 2 pages of information about Crepuscular.

The term "crepuscular" refers to the hours of dawn and dusk. Crepuscular animals include those species that are active at dawn, dusk, or both. Some animals are mistakenly considered to be nocturnal although they are actually crepuscular.

Most crepuscular animals tend to be desert dwellers that remain at rest during the harsh heat of day and the bitter chill of night. Snakes, mice, lizards, and some rabbits use broad daylight and late-night hours for resting in their respective shelters. By mating and foraging for food during the more temperate hours, crepuscular animals are able to conserve precious energy and still pursue those activities that contribute to propagating the species. The saw-scaled adder (Echis carinatus) of North Africa, Syria, Iran, and India prospers in arid, sandy regions. During the day, it lies sheltered from the heat under fallen tree trunks or rocks, or flattens its body and digs into the sand by means of its keeled lateral scales.

Not all crepuscular species call the desert their home. Certain deer, snakes, bats, rodents, and opossum tend to be active during early morning and twilight hours because of rhythms of behavior as opposed to environmental controls. The forest musk deer (Moschus chrysogaster) lives in the forests and brushlands from the Himalayas to central China. Active in the morning and evening hours, the animal feeds on grass, moss, shoots, twigs, and buds.

Species that find food, avoid predators, and generally maintain body state more effectively during twilight obviously benefit from responding appropriately to different light levels. They may operate most efficiently if they can predict the changes during any twenty-four-hour period by means of an internal clock.

More summaries and resources for teaching or studying Crepuscular.

Crepuscular from Macmillan. Copyright © 2001-2006 by Macmillan Reference USA, an imprint of the Gale Group. All rights reserved.