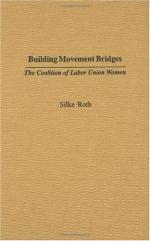 Between the 1820s and the 1860s the overwhelming majority of black workers in Baltimore, Maryland, were free, although some slaves did work alongside freedmen. For the most part, free black workers at this time were not allowed to join white trade unions. Sometimes, however, free blacks working along the industrial East Coast of the United States joined all-black groups such as the American League of Colored Laborers, which was established in New York City in 1850 as one of the first local organizations of black workers.

One such free black man was Isaac Myers, who grew up in Baltimore as the son of poor free parents. By 1841 Myers was apprenticed to James Jackson, a prominent black ship caulker. Within 20 years Myers was working as a skilled caulker and supervising other men in the caulking of clipper ships within the harbor...