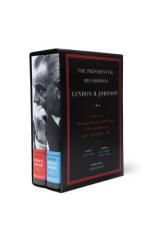 This encyclopedia article consists of approximately 2 pages of information about Civil Rights Act.

In 1964, the United States passed one of its strongest civil rights laws in history, the Civil Rights Act. The act bans discrimination because of a person's color, race, national origin, religion, or sex; it primarily protects the rights of African Americans and other minorities. Major features of the Civil Rights Act include the freedom to vote and use hotels, restaurants, theaters, parks, and all other public places. The law also encouraged the desegregation of public schools and authorized the withdrawal of federal funds from programs practicing discrimination. Other major

President Lyndon B. Johnson (center, seated) at the signing of the Civil Rights Act.

features included the prohibition of job discrimination and the creation of the Equal Employment Opportunities Commission.

The Civil Rights Act was an attempt to improve the quality of life for African Americans and other minority groups. Historical momentum for civil rights legislation grew in the mid-1940s due to the extensive black migration to northern cities. During this time, Congress be came active in the pursuit of civil rights, with the judicial branch of the government at its heels. Shortly afterwards, the Supreme Court joined the civil rights forces and in doing so added to the historical pressure for the Civil Rights Act of 1964. One of the most important and influential Supreme Court decisions involving civil rights legislation was the 1954 ruling in Brown v. Board of Education of Topeka, Kansas, which desegregated American public schools and paved the way for the civil rights movement.

The specific source of the Civil Rights Act of 1964 was President John F. Kennedy. He began gaining support for it in a televised national address by urging Americans to take action to guarantee equal treatment for all. Kennedy then proposed an act dealing with voting rights, public accommodations, desegregation of public schools, and many more items on the civil rights agendas. On July 2, 1964, President Johnson signed the bill that Kennedy had fought for, which created a major piece of civil rights legislation. Although the Civil Rights Act did not resolve all problems of discrimination, it did open the door to further progress by lessening racial restrictions on the use of public facilities, providing more job opportunities, strengthening voting laws, and limiting federal funding of discriminatory programs.

Civil Rights Act from Macmillan. Copyright © 2001-2006 by Macmillan Reference USA, an imprint of the Gale Group. All rights reserved.