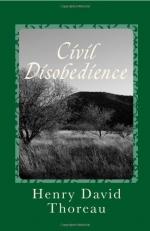 This encyclopedia article consists of approximately 8 pages of information about Civil Disobedience.

The idea of civil disobedience comes out of the tradition of social and political protest whose best known advocates are the nineteenth-century American transcendentalist Henry David Thoreau, the Indian reformer Mohandas Gandhi, and the American civil rights leader, Martin Luther King, Jr. While the idea of civil disobedience has diverse roots, the views of these activist/thinkers set the stage for academic and popular discussion.

The definition of civil disobedience that best accords with the tradition of Thoreau, Gandhi, and King categorizes acts as civil disobedience if they have four features. They must be: (1) illegal; (2) nonviolent; (3) public; and (4) done to protest a governmental law or policy.

Thoreau's refusal to pay his taxes has all these features. It was illegal...

More summaries and resources for teaching or studying Civil Disobedience.

Civil Disobedience from Macmillan. Copyright © 2001-2006 by Macmillan Reference USA, an imprint of the Gale Group. All rights reserved.