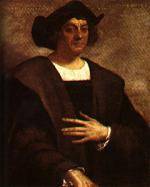 "...I promise, that with a little assistance afforded me by our most invincible sovereigns, I will procure them as much gold as they need, as great a quantity of spices, of cotton,...and as many men for the service of the navy as their Majesties may require."

Exploration and settlement of the United States began in the late fifteenth century as a direct outcome of events in Europe, the Middle East, and Africa. One of the most significant reasons was the Crusades (1099–1272), an unsuccessful Christian campaign to recapture the Holy Land (a region in the Middle East comprising parts of modern Israel, Jordan, and Egypt; today known as Palestine...