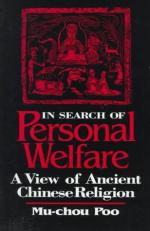 This encyclopedia article consists of approximately 35 pages of information about Chinese Philosophy.

CHINESE PHILOSOPHY. The major developments in Chinese philosophy during the past three thousand years will be outlined here; ideas that are essentially religious, treated elsewhere, will be noted only as may be necessary to show the religious relevance and historical context of philosophical themes. This overview will be at once chronological and topical, as follows:

China circa 550 BCE consisted only of what is now North China; even the states of the Yangtze River valley did not speak the language of what was recognized as the civilized heartland to the north. This known "world...

More summaries and resources for teaching or studying Chinese Philosophy.

Chinese Philosophy from Macmillan. Copyright © 2001-2006 by Macmillan Reference USA, an imprint of the Gale Group. All rights reserved.