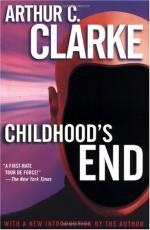 Childhood's End - Research Article from Literature and Its Times

Arthur C. Clarke was born on December 16, 1917, in Minehead, England, a small coastal town on the Bristol Channel. At the age of twelve, he read his first science fiction magazine, a November 1928 issue of Amazing Stories. Four years later, he joined the British Interplanetary Society, a group founded on the common desire for space exploration. For the next two decades, his interest in this group would endure, through his tenure as a radar instructor in the Royal Air Force during World War II and later as a student in physics and pure and applied mathematics at King's College in London. The influence of the interplanetary society is apparent in Childhood's End, the novel most responsible for placing Clarke's name among the foremost science fiction authors.

Life in the fifties. "We have arrived at...

More summaries and resources for teaching or studying Childhood's End.

Childhood's End from Gale. ©2008 Thomson Gale, a part of the Thomson Corporation. All rights reserved.