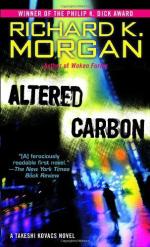 This encyclopedia article consists of approximately 5 pages of information about Carbon.

Carbon is the first element in Group 14 of the periodic table. The elements in this group are sometimes called the carbon family. Carbon has an atomic number of 6, an atomic mass of 12.01115, and a chemical symbol of C.

Carbon exists in a number of allotropic forms. Two that have crystalline structure are diamond and graphite. These two allotropes have very different physical properties. Diamond is the hardest known naturally-occurring substance, while graphite is one of the softest. The melting point of diamond is about 6,700°F (3,700°C), its boiling point about 7,600°F (4,200°C), and its density 3.50 grams per cubic centimeter. By contrast, graphite does not melt when heated, but sublimes at a temperature of about 6,600°F (3,650°C). Its density ranges from about 1.5-1.8 grams per cubic centimeter. The exact value depends on the source from which the graphite was obtained.

More summaries and resources for teaching or studying Carbon.

Carbon from Gale. ©2005-2006 Thomson Gale, a part of the Thomson Corporation. All rights reserved.