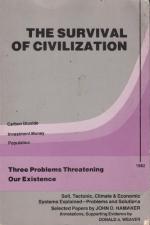 This encyclopedia article consists of approximately 1 page of information about Carbon Dioxide.

The fourth most abundant gas in the earth's atmosphere, carbon dioxide occurs in an abundance of about 350 parts per million. The gas is released by volcanoes and during respiration, combustion, and decay. Plants convert carbon dioxide into carbohydrates by the process of photosynthesis. Carbon dioxide normally poses no health hazard to humans. An important factor in maintaining the earth's climate, molecules of carbon dioxide capture heat radiated from the earth's surface, raising the planet's temperature to a level at which life can be sustained, a phenomenon known as the greenhouse effect. Some scientists believe that increasing levels of carbon dioxide resulting from human activities are now contributing to a potentially dangerous global warming.

More summaries and resources for teaching or studying Carbon Dioxide.

Carbon Dioxide from Gale. ©2005-2006 Thomson Gale, a part of the Thomson Corporation. All rights reserved.