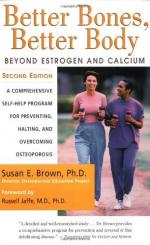 This encyclopedia article consists of approximately 4 pages of information about Calcium.

Calcium is the third element in Group 2 of the periodic table. The members of this group are commonly described as the alkaline earth elements. Calcium's atomic number is 20, its atomic mass is 40.08, and its chemical symbol is Ca.

Calcium is a fairly soft metal with a shiny silver surface when first cut. The surface quickly becomes dull, however, as calcium reacts with oxygen to form a coating of white or gray calcium oxide. Calcium's melting point is 1,560°F (850°C) and its boiling point is 2,620°F (1,440°C). The element has a density of 1.54 grams per cubic centimeter.

Calcium is a moderately active element that combines readily with oxygen to form calcium oxide (CaO): 2Ca + O2 2CaO. Calcium also reacts with the halogens, with cold water, with most acids, and with most nonmetals, such as sulfur and phosphorus.

Calcium is the fifth...

More summaries and resources for teaching or studying Calcium.

Calcium from Gale. ©2005-2006 Thomson Gale, a part of the Thomson Corporation. All rights reserved.