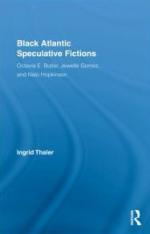 As the premier black female science fiction writer, Octavia E. Butler has received both critical and popular acclaim. She describes herself as "a pessimist if I'm not careful, a feminist, a Black, a former Baptist, an oil-and-water combination of ambition, laziness, insecurity, certainty and drive." Butler's stories cross the breadth of human experience, taking readers through time, space, and the inner workings of the body and mind. She frequently disrupts accepted notions of race, gender, sex, and power by rearranging the operations of the human body, mind, or senses. Ironically, her significance has been largely ignored by academics. Her notable books include Kindred, Wild Seed, Mind of My Mind, Dawn and Parable of the Sower. She has won the coveted Hugo and Nebula awards for "Speech Sounds" and "Bloodchild," and in 1995 was awarded a MacArthur "Genius" grant for pushing the boundaries of science fiction.