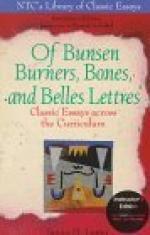 This encyclopedia article consists of approximately 2 pages of information about Bunsen Burner.

The Bunsen burner was invented in Germany in 1855 by German chemist Robert Wilhelm Bunsen (1811-1899). One of the most commonly used pieces of equipment for heating in a laboratory, a Bunsen burner uses natural gas as a fuel supply. Due to its design the flame is very easy to control.

The entire device stands on a base that has a chimney emerging from it. The gas enters at the base of the chimney through a small, upward-facing hole that produces a jet of gas. Around the base of the chimney, level with the jet is a movable collar. This collar has a hole in it that can be lined up with a similar hole in the chimney. When both holes are aligned the maximum amount of air is allowed to enter. By altering the ratio of air and gas different types of flame can be produced. When the hole is closed and air is excluded from mixing with the jet of gas, a yellow, luminous flame is produced. This occurs because with the reduced air supply not all of the fuel is burned and any unburned particles of carbon become hot and glow. By increasing the air flow at the base more of the fuel can be burned. When the two holes are exactly aligned a blue flame is produced with a roaring sound. This is the hottest flame that can be produced by a Bunsen burner and it will not leave carbon deposits on whatever is being heated. The blue flame has an inner cone of unburned gas and a paler outer cone of complete combustion. The hottest part of the flame (about 2,700°F/1,500°C) is immediately above the inner cone.

A Bunsen burner is a gas burner which can have variable heating properties by adjusting the mixture of gas and air.

More summaries and resources for teaching or studying Bunsen Burner.

Bunsen Burner from Gale. ©2005-2006 Thomson Gale, a part of the Thomson Corporation. All rights reserved.