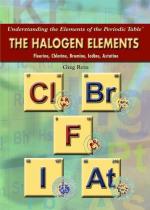 This encyclopedia article consists of approximately 3 pages of information about Bromine.

Bromine is the third member of the halogen family, the elements that make up Group 17 in the periodic table. Its atomic number is 35, its atomic mass is 79.904, and its chemical symbol is Br.

Bromine is one of only two elements that is liquid at room temperature, the other being mercury. It is a beautiful deep reddish brown liquid that evaporates easily, giving off strong fumes that irritate the throat and lungs. Bromine boils at a temperature of 137.8°F (58.8°C), and its density is 3.1023 grams per cubic centimeter. Bromine's freezing point is 18.9°F (-7.3°C).

Like all halogens, bromine is a very reactive element, less reactive than fluorine or chlorine, but more reactive than iodine. It reacts vigorously with many metals, sometimes explosively. Bromine even reacts with relatively inert elements such as platinum and palladium.

Bromine is a moderately abundant element...

More summaries and resources for teaching or studying Bromine.

Bromine from Gale. ©2005-2006 Thomson Gale, a part of the Thomson Corporation. All rights reserved.