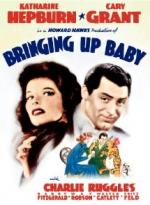 Howard Hawks
This encyclopedia article consists of approximately 1 page of information about Bringing Up Baby.

Though Bringing Up Baby was not a box-office success when released in 1938, it has since become a favorite of film critics and audiences. Directed by Howard Hawks, the film is an example of screwball comedy, a genre which emerged in the early 1930s. Known as a genre depicting "a battle of the sexes," the films present independent women, fast paced dialogue, and moments of slapstick in absurd storylines that eventually lead to romance between the male and female leads, in this case played by Katherine Hepburn and Cary Grant. Like most comedies, the film serves to critique society, particularly masculinity and class.

Cary Grant and Katharine Hepburn in a scene from the film Bringing Up Baby.

More summaries and resources for teaching or studying Bringing Up Baby.

Bringing Up Baby from Gale. ©2005-2006 Thomson Gale, a part of the Thomson Corporation. All rights reserved.