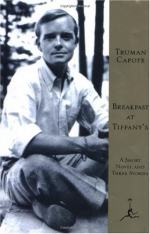 Truman Capote
This encyclopedia article consists of approximately 2 pages of information about Breakfast at Tiffany&#x0027;s.

Paramount Pictures' release of Breakfast at Tiffany's in 1961 solidified the cosmopolitan image of Audrey Hepburn and solidified one of the most enduring fashion trends: the little black dress. The movie was based closely on Truman Capote's 1959 short novel by the same name, which most critics called Capote's best work.

The story adeptly portrays the glamorous romantic illusions of Holly Golightly, a young woman travelling in search of a perfect home. She is so driven by her quest that she refuses to name her cat until she finds a home. But her inability to resolve the lingering issues of her past keeps her from finding peace. Only while looking through the window of Tiffany's jewelry store does Holly feel a sense of calm.

Audrey Hepburn as she appeared in the film Breakfast at Tiffany's.

Most films about young women, in the early 1960s, portrayed them as living under parental influences until they were married. Breakfast at Tiffany's broke that mold and showed Holly as a young woman living on her own the best way she could, as an escort to men she referred to as "rats." While Capote imagined Marilyn Monroe as the perfect actress for the part of Holly because her troubled past closely reflected the turmoil in the life of his character, Paramount Pictures instead cast Audrey Hepburn for the part and downplayed the dark past of the character. In doing so, the film heightened the dramatic importance of Holly's past and allowed Hepburn to bring a sense of mystery to her seemingly flighty character.

Audrey Hepburn's acting was not alone in effecting the romantic qualities of this film. Dressing Holly Golightly in sleeveless black shifts, big black hats, and large black sunglasses, fashion designer Givenchy made the little black dress—a standard cocktail dress since the 1920s—an essential component of stylish women's wardrobes. And Audrey Hepburn inspired Henry Mancini to write the score to "Moon River," the movie's sentimental theme song. Johnny Mercer wrote the lyrics, and the song won two Academy Awards. By the 1990s, Breakfast at Tiffany's had long since been considered a classic film and remained the film most associated with Audrey Hepburn's portrayal of a cosmopolitan and youthful romantic sensibility.

More summaries and resources for teaching or studying Breakfast at Tiffany's.

Breakfast at Tiffany's from Gale. ©2005-2006 Thomson Gale, a part of the Thomson Corporation. All rights reserved.