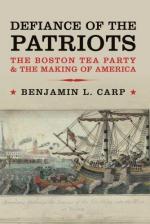 This encyclopedia article consists of approximately 4 pages of information about Boston Tea Party.

On the evening of December 16, 1773, a few dozen of the Sons of Liberty, opposing new British laws in the colonies, systematically dumped three shiploads of tea

"The Destruction of Tea at Boston Harbor," by Sarony and Major, 1846.

into Boston harbor. They acted to prevent the royal authorities from collecting taxes on that import. The destruction of the tea was a political protest against one British tax, but it had the unintended effect of setting off a chain of events that would lead to war in April 1775.

Tea seems like an odd basis for such a bitter conflict, and a decade earlier Americans would probably have reacted tepidly to changes in imperial tea policy. But since the Stamp Act of 1765, colonial politicians had railed against taxation without representation, urging people to protest by buying fewer goods from Britain. The...