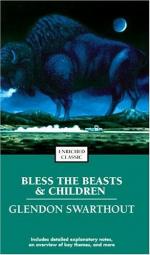 Glendon Swarthout
This encyclopedia article consists of approximately 9 pages of information about Bless the Beasts and Children.

Before becoming a full-time author, Glendon (Fred) Swarthout taught English at various universities. He wrote his first novel in 1943, going on to create short stones, film scripts, and plays as well. His bestselling novel, Bless the Beasts and Children, is a comingof- age story about the pains of adolescence; it also serves as a social and ecological commentary about animal preservation in the United States. Published in 1970 and written shortly before, the novel mirrors America's growing concern for conservation at this time by emphasizing the cruel but legal method of buffalo hunting in the United States. Also raised in the novel are other contemporary issues of the day, such as the war in Vietnam.

The buffalo. At the turn of the century, the North American bison, a type...

Bless the Beasts and Children from Gale. ©2008 Thomson Gale, a part of the Thomson Corporation. All rights reserved.