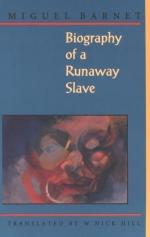 This encyclopedia article consists of approximately 24 pages of information about Biography of a Runaway Slave.

Miguel Barnet was born in 1940 and raised in Havana, Cuba. In the late 1950s he became interested in Afro- Cuban religion and trained as a folklorist under the direction of Fernando Ortiz, a pioneer in the study of Afro-Cuban culture. The Cuban Revolution (1959) had a tremendous impact on Barnets life and outlook, and fueled his passion to learn about the people of Cuba. In 1963 he first heard of Esteban Montejo, who was then 103 years old. Interviews with the former slave and runaway evolved into Biography of a Runaway Slave, which is considered the first Latin American testimonial novel. Barnet has continued to experiment with this form in La Canción de Rachel (1969) and Gallego (1981). Although his international reputation rests on his testimonial novels, his poetry has won Cuban and international awards.

Events in History at the Time the Biography Takes Place

More summaries and resources for teaching or studying Biography of a Runaway Slave.

Biography of a Runaway Slave from Gale. ©2008 Thomson Gale, a part of the Thomson Corporation. All rights reserved.