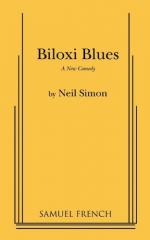 Biloxi Blues - Research Article from Literature and Its Times

Bom in 1927 in New York, playwright Neil Simon created a dozen popular plays before the production of Biloxi Blues. It is the second in a set of autobiographical plays-specifically, in a trilogy consisting of Brighton Beach Memoirs (1983), Biloxi Blues (1985), and Broadway Bound (1986). The play itself details the experiences of Eugene Morris Jerome while he served in the United States Army during World War II. Unlike most war productions, Biloxi Blues focuses not on issues of combat, but rather on the training that young soldiers receive. Throughout the course of the work, Eugene learns both how to be a better soldier and how to be a better man. Faced with such sociological issues as anti-Semitism and racism, he acquires his own sense of moral responsibility for the times in which he lives.

Biloxi Blues from Gale. ©2008 Thomson Gale, a part of the Thomson Corporation. All rights reserved.