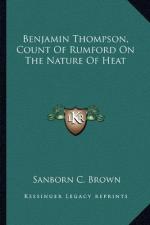 Benjamin Thompson - Research Article from Science and Its Times

This encyclopedia article consists of approximately 3 pages of information about Benjamin Thompson.

As a scientist, Benjamin Thompson, also known as Count Rumford, is best remembered for his discoveries that provided the foundation for modern theories of heat and for a number of practical inventions that improved living and working conditions.

Thompson was a most intriguing individual. His life was characterized by ambition and opportunism. Throughout his career, his contributions to science and society were always interwoven with political schemes. It is fortunate that the significant results of his work were not ultimately harmed by the motives that led him to their accomplishment.

At the age of 19 he married a wealthy widow and, through her influence, was appointed a major in the New Hampshire militia. Because he spied for the royal governor against the colonists, he was forced to flee with...

More summaries and resources for teaching or studying Benjamin Thompson.

Benjamin Thompson from Gale. ©2005-2006 Thomson Gale, a part of the Thomson Corporation. All rights reserved.