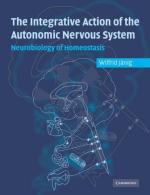 This encyclopedia article consists of approximately 2 pages of information about Autonomic Nervous System.

The autonomic nervous system (ANS) is the specialized component of the nervous system that functions to regulate the activities of cardiac muscle, smooth muscle, endocrine glands, and exocrine glands. The ANS functions involuntarily and reflexively in an automatic manner without conscious control.

The involuntary ANS is controlled in the hypothalamus while the somatic system is regulated by other regions of the brain (cortex). In contrast, the somatic nervous system may control motor functions by neural pathways that contain only a single axon that innervates an effector (e.g., a target) muscle. The ANS is comprised of pathways that must contain at least two axons separated by a ganglia (clusters of neural cells outside of the brain and spinal cord of the central nervous system) that lies in the path between the axons.

The principal neurotransmitters in ANS synapses are acetylcholine and norepinephrine.

Autonomic Nervous System from Gale. ©2005-2006 Thomson Gale, a part of the Thomson Corporation. All rights reserved.