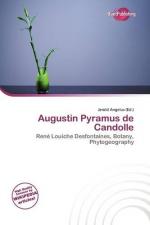 Augustin de Candolle is considered one of the most important botanists of the nineteenth century. His major contributions were in the fields of plant classification and morphology, the study of form, and in the geographical distribution of plants.

Candolle was born in Geneva and his early studies were in Switzerland. In 1796 he moved to Paris, where he studied medicine and the natural sciences and where he often visited the natural history museum, which was a center for research. He came to know leading scientists of the day, including zoologist Georges Cuvier (1769-1832) and the early advocate of evolution, Jean-Baptiste de Lamarck (1744-1829). These connections increased Candolle's interest in biology to the point where he abandoned medicine and devoted himself to botany, focusing on the investigation of plant structure.

Candolle remained in Paris until 1808, when he was made chair of...