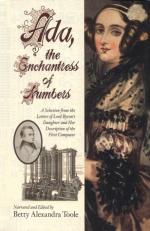 (Augusta) Ada Byron, Countess of Lovelace - Research Article from Science and Its Times

This encyclopedia article consists of approximately 1 page of information about (Augusta) Ada Byron, Countess of Lovelace.

English mathematician and pioneer of computer science. The daughter of poet Lord Byron, Ada taught herself geometry and, encouraged by her mother, was trained in astronomy and mathematics. She was later helped with advanced studies by Augustus De Morgan, first professor of mathematics at the University of London. Byron is best known for her work with mathematician Charles Babbage, whose work she translated and published along with her own annotations and important comments. Though underappreciated during her life, she is now highly regarded as an early computer program writer. ADA, the high-level computer programming language, is named in her honor. Byron became Countess of Lovelace in 1838 through marriage to William King, an earl.

(Augusta) Ada Byron, Countess of Lovelace from Gale. ©2005-2006 Thomson Gale, a part of the Thomson Corporation. All rights reserved.