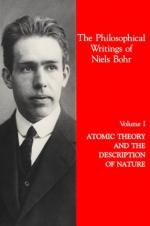 This encyclopedia article consists of approximately 3 pages of information about Atomic Theory.

One of the points of dispute among early Greek philosophers was the ultimate nature of matter. The question was whether the characteristics of matter that we can observe with our five senses are a true representation of matter at its most basic level.

Some philosophers thought that they were. Anaxagoras of Klazomenai (c. 498-428 B.C.), for example, taught that matter can be sub-divided without limit and that it retains its characteristics no matter how it is divided.

An alternative view was that of Leucippus of Miletus (about 490 b.c.) and his pupil, Democritus of Abdera (c. 460-370 B.C.). The views of these scholars are preserved in a few fragments of their writings and of commentaries on their teachings. Some writers doubt that Leucippus even existed.

In any case, the ideas attributed to them are widely known. They thought that all matter consists of tiny...

More summaries and resources for teaching or studying Atomic Theory.

Atomic Theory from Gale. ©2005-2006 Thomson Gale, a part of the Thomson Corporation. All rights reserved.