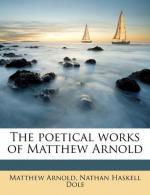 This encyclopedia article consists of approximately 4 pages of information about Arnold, Matthew (1822&#x2013;1888).

Matthew Arnold, the English poet and social and literary critic, was the son of Dr. Thomas Arnold, headmaster of Rugby. Matthew Arnold was educated at Winchester and Rugby and entered Balliol College, Oxford, in 1841. In 1847 he became private secretary to Lord Lansdowne, who in 1851 appointed Arnold inspector of schools, a position he held until 1886. In 1857 he was elected professor of poetry at Oxford.

As a critic, Arnold ranged over a broad spectrum from literary criticism through educational theory to politics, social thought, and religion.

Arnold's most important contribution to nineteenth-century thought was his discussion of the significance of culture as a social ideal. His related discussion of the function of criticism has been widely influential. He also contributed to the dispute over the relation between the Christian Scriptures and belief.

More summaries and resources for teaching or studying Arnold, Matthew (1822-1888).