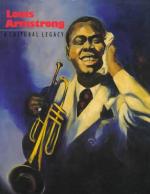 This encyclopedia article consists of approximately 8 pages of information about Armstrong, Louis.

Celebrated as one of the greatest jazz performers of all time, Louis Armstrong had a career spanning more than fifty years, from the 1910s to the 1960s. A supremely talented, versatile trumpet player with an unforgettable, gravelly singing voice, Armstrong was popular all over the world, especially during the last twenty-five years of his life. It was during the Roaring Twenties, though, that he played a vital role in the development of jazz, the unique new musical form that was setting the decade on fire. Armstrong's innovative approach, along with his ability to express through his music both deep sorrow and boundless joy, secured his place in history.

An Early Interest in Dixieland Music

Armstrong was born into poverty in New Orleans, Louisiana, on August 4, 1901 (he would later give his birth date as July...

More summaries and resources for teaching or studying Armstrong, Louis.