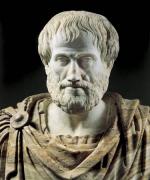 Aristotelian Physics - Research Article from Science and Its Times

This encyclopedia article consists of approximately 7 pages of information about Aristotelian Physics.

Aristotle's (384-322 B.C.) Physics was one of the most influential pieces of writing in science. It defined the field of physics for centuries after it was collated from Aristotle's notes by one of his students. It became the cornerstone of Western science as allowed by the Church. While many of the claims within the Physics are incorrect, it represents one of the first attempts to offer a coherent, logical, and natural explanation of motion and change within the physical world.

Greek philosophy and speculation on the world has a long history before Aristotle. His writings build from, or criticize, earlier philosophical ideas about the world. One of the main directions in early Greek philosophy was to speculate on whether the world was made from many substances or simply one in many forms. For example, Anaximenes of Miletus (c. 545 B.C.) suggested air was...

More summaries and resources for teaching or studying Aristotelian Physics.

Aristotelian Physics from Gale. ©2005-2006 Thomson Gale, a part of the Thomson Corporation. All rights reserved.