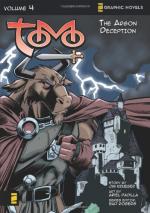 This encyclopedia article consists of approximately 2 pages of information about Argon.

Argon is a noble gas, one of the elements that make up Group 18 of the periodic table. Its atomic number is 18, its atomic mass is 39.948, and its chemical symbol is Ar.

Argon is the third most abundant gas in the atmosphere, after nitrogen and oxygen. It makes up about 0.93% of the atmosphere. It is also found in very small amounts in the Earth's crust.

Argon was discovered in 1894 by the English chemist John William Strutt (Lord Rayleigh) and the Scottish chemist William Ramsay. The element's existence had been predicted more than a century earlier by the English chemist and physicist Henry Cavendish. Cavendish had removed the two most abundant gases, nitrogen and oxygen, from air, but found that a very small amount of an unidentified gas still remained from the air. Unfortunately, he was not able to identify what that remaining portion was.

The name chosen by Rayleigh and Ramsay for the new element comes from the Greek word argos, meaning "lazy." They thought the name was a good one because the new element seemed too "lazy" to react with any other elements or compounds.

Argon is used to provide an inert atmosphere that will protect materials from reacting with oxygen or other gases. For example, the inside of a light bulb is often filled with argon. No matter how hot the filament inside the bulb gets, it will not react with argon. Argon is also used in welding to prevent the two metals being heated from reacting with oxygen before they join to each other.

More summaries and resources for teaching or studying Argon.

Argon from Gale. ©2005-2006 Thomson Gale, a part of the Thomson Corporation. All rights reserved.