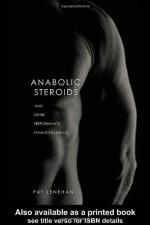 Anabolic Steroids - Research Article from Encyclopedia of Childhood and Adolescence

This encyclopedia article consists of approximately 2 pages of information about Anabolic Steroids.

Types of drugs that increase strength and muscle growth when ingested by humans.

Anabolic steroids are drugs containing hormones, or hormone-like substances, that are used to increase strength and promote muscle growth. They were first developed in the 1930s in Europe to treat undernourished patients and to promote healing after surgery. Competitive weightlifters began using steroids in the 1950s as a way to increase their athletic performance. Use gradually spread throughout the world among athletes in other sports.

It has been estimated that at least one in 15 male high school seniors in the United States—more than a half-million boys—has used steroids. Some are athletes attempting to increase their strength and size; others are simply youths attempting to speed up their growth to keep pace with their peers. In some countries, anabolic steroids are available over the counter. In the United States, a doctor's prescription is necessary.

While the effects of steroids can seem desirable at first, there are serious side effects. Excessive use can cause a harmful imbalance in the body's normal hormonal balance and body chemistry. Heart attacks, water retention leading to high blood pressure and stroke, and liver and kidney tumors all are possible. Young people may develop acne and a halting of bone growth. Males may experience shrinking testicles, falling sperm counts, and enlarged prostates. Women frequently show signs of masculinity and may be at higher risk for certain types of cancer and the possibility of birth defects in their children.

The psychological effects of steroid use are also alarming: drastic mood swings, inability to sleep, and feelings of hostility. Steroids may also be psychologically addictive. Once started, users—particularly athletes—enjoy the physical "benefits" of increased size, strength, and endurance so much that they are reluctant to stop even when told about the risks. Major athletic competitions, including the Olympic Games, routinely screen athletes to prevent illegal steroid use.

More summaries and resources for teaching or studying Anabolic Steroids.

Anabolic Steroids from Gale. ©2005-2006 Thomson Gale, a part of the Thomson Corporation. All rights reserved.