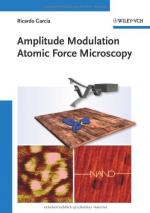 This encyclopedia article consists of approximately 2 pages of information about Amplitude Modulation.

Amplitude modulation (AM) was the invention that made radio broadcasting of voice and music possible. In its infancy, radio waves were used to send nothing more than Morse code signals. In fact, the waves themselves have nothing to do with sound. Radio waves are a form of electromagnetic radiation that make an excellent "carrier" of audio signals, first used for Morse code. Guglielmo Marconi, using an intermittent spark-pulse radio wave generator, amazed the world in 1901 by sending Morse code 2,137 miles (3,440 km) from England to Newfoundland. In that same year Reginald Aubrey Fessenden invented a high-frequency alternator which produced a continuous radio wave. It was a great improvement over Marconi's intermittent generator and was essential to the development of amplitude modulation. Fessenden invented the way to modulate the amplitude (the distance from " peak" to "trough") of radio waves. A microphone was used to convert ordinary sound into an electric signal which was superimposed on the continuous radio waves. The modulated radio waves, now matching the amplitude of the electric signal, were sent out over the transmitting antenna. At the receiving antenna, the radio waves are converted back into electric signals and demodulated; the radio wave carrier is removed, leaving behind the audio signal that is amplified and sent to a loudspeaker. On Christmas Eve, 1906, Fessenden made the world's first radio broadcast. He transmitted his voice, as well as violin and recorded music a distance of several hundred miles to ships on the Atlantic Ocean. Amplitude modulation was a great improvement in radio transmission, but it has limitations; interference caused by the earth's ionosphere is a big problem. This layer of charged particles, theorized in 1902 by Arthur Kennelly (1861-1939) and Oliver Heaviside (1850-1925), and discovered in 1924 by Edward Appleton (1892-1965), was a double-edged sword; it reflected Marconi's signal, making his trans-Atlantic message possible, but it also interfered with the modulated signals. Changes in the ionosphere at night alter its reflecting characteristics; some AM signals fade while others travel greater distances to interfere with other AM signals. In addition, lightning, a strong source of electromagnetic radiation, breaks up the modulated radio signal, causing a great deal of static. These problems were solved with Edwin Howard Armstrong 's invention of frequency modulation (FM) broadcasting in 1924, but he traded one set of problems for another.

More summaries and resources for teaching or studying Amplitude Modulation.

Amplitude Modulation from Gale. ©2005-2006 Thomson Gale, a part of the Thomson Corporation. All rights reserved.