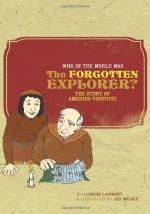 This encyclopedia article consists of approximately 4 pages of information about Amerigo Vespucci.

Amerigo Vespucci was the first to determine that South America was a separate, previously unknown continent that was not a part of Asia. He also worked out a system for calculating exact latitude that enabled him to produce a nearly correct estimate of the circumference of the earth. These two discoveries, which caused a revolution in geography and mapmaking, assured Vespucci a place in history; yet he is perhaps better known as the explorer for whom America was named. Since the time Vespucci claimed to have discovered the continent, scholars have been debating whether he or Christopher Columbus (see entry) should be honored for the achievement.

Vespucci was born on March 18, 1454, in Florence, Italy. His studies were supervised by an uncle who instilled in him an interest in astronomy and the study of the universe...

More summaries and resources for teaching or studying Amerigo Vespucci.

Amerigo Vespucci from UXL. ©2005-2006 by U•X•L. U•X•L is an imprint of Thomson Gale, a division of Thomson Learning, Inc. All rights reserved.