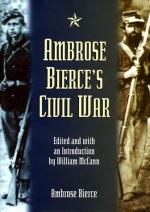 This encyclopedia article consists of approximately 7 pages of information about Ambrose Bierce.

"To this day I cannot look over a landscape without noting the advantages of the ground for attack or defense."

Ambrose Bierce was one of America's best-known writers of the nineteenth century. As a Union soldier during the Civil War, Bierce witnessed the violence and horror of war firsthand. After the war ended, he drew upon those wartime experiences to write a number of popular short stories and essays. In addition, he ranked as one of the country's most famous newspaper columnists during the 1880s and 1890s.

Growing Up in Poverty

Ambrose Bierce was born in southeastern Ohio in 1842, but he spent most of his childhood in Indiana. He was the tenth of thirteen children born...

More summaries and resources for teaching or studying Ambrose Bierce.

Ambrose Bierce from UXL. ©2005-2006 by U•X•L. U•X•L is an imprint of Thomson Gale, a division of Thomson Learning, Inc. All rights reserved.