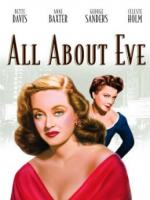 All About Eve - Research Article from St. James Encyclopedia of Popular Culture

Joseph L. Mankiewicz
This encyclopedia article consists of approximately 1 page of information about All About Eve.

A brilliantly cynical backstage look at life in the theatre, All About Eve is a sophisticated movie gem that has become a cult classic since its debut in 1950. With a sparklingly witty script written and directed by Joseph Mankiewicz, All About Eve hinges on a consummate Bette Davis performance. Playing aging Broadway star Margo Channing, Davis is perfect as the vain, vulnerable, and vicious older actress, while delivering such oft-quoted epigrams as "Fasten your seat belts, it's going to be a bumpy night." When aspiring young actress Eve Harrington, played by Anne Baxter, conspires to take over both Margo Channing's part and her man, an all-out battle ensues between the two women. Co-starring George Sanders, Celeste Holm, Thelma Ritter, and featuring a very young Marilyn Monroe, All About Eve won six Oscars, including Best Picture and Best Director. All About Eve is the cinematic epitome of Hollywood wit and sophistication.

Microsoft Corporation, Cinemania 96: The Best-Selling Interactive Guide to Movies and the Moviemakers.

Monaco, James and the Editors of Baseline. Encyclopedia of Film. New York, Perigee, 1991.

More summaries and resources for teaching or studying All About Eve.

All About Eve from Gale. ©2005-2006 Thomson Gale, a part of the Thomson Corporation. All rights reserved.