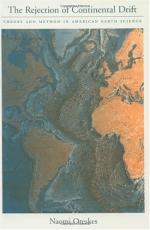 This encyclopedia article consists of approximately 5 pages of information about Alfred Wegener Introduces the Concept of Continental Drift.

The theory of continental drift holds that the great landmasses are slowly moving, and have done so continually over the long span of geologic time. According to the theory, a single landmass called Pangaea split up about 200 million years ago, and the resulting continents eventually drifted to their present locations. The German meteorologist Alfred Wegener (1880-1930) introduced the theory of continental drift in 1912.

Looking at a world map, it is easy to see that the edges of Europe and North America, Africa and South America, would fit together nicely, almost like pieces in a jigsaw puzzle. This was noticed almost as soon as Europeans began traveling to the Americas; Francis Bacon wrote of it in 1620. But the early mapmakers had no real understanding of how the Earth formed and changed over time...

More summaries and resources for teaching or studying Alfred Wegener Introduces the Concept of Continental Drift.

Alfred Wegener Introduces the Concept of Continental Drift from Gale. ©2005-2006 Thomson Gale, a part of the Thomson Corporation. All rights reserved.