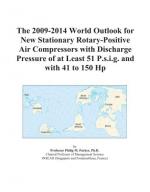 This encyclopedia article consists of approximately 2 pages of information about Air Compressor.

Compressed air is used in a variety of ways—from stoking a fire to propelling a jet aircraft --and is produced by many types of machines. Although such mechanisms as pile drivers, fans, or drills use air under pressure to perform some task, machines whose sole purpose is to compress air are generically referred to as air compressors.

The earliest type of air compressor was the bellows. It was, and still is, used for building fires. At first bellows consisted of nothing more than leather bags. Later, handles and intake valves were added to facilitate continuous operation.

Hydraulic compressors were used in early Roman times in the metal-forging process. Water falling down a pipe under the influence of gravity forced air out of the bottom and into the furnace. In 1650, German scientist Otto von Guericke devised an air pump consisting of a single piston and cylinder. With it he was able to experiment with compressed air and vacuums.

George Medhurst of England designed the first motorized air compressor in 1799 and used it in mining. In 1852, Isambard K. Brunel designed a pressurized caisson for workers in the Chepstow railway bridge project that prevented water and mud from entering the work space. Englishman Thomas Cochrane invented a compressed air rock drill in 1857 for use in tunneling. In the late 1800s, Amedee Bollee used compressed air to improve the hydraulic ram.

Whether applied directly or placed behind a movable object, compressed air can supply a powerful force that cannot be conveniently produced by other means. The modern compressors that produce this force can be categorized in three types. The reciprocating compressor uses a piston that draws air through an intake valve and then pushes the air out through an outlet valve. These devices are used for general industrial purposes, such as in blast furnaces. Rotary compressors consist of enclosed fans that take air in at the center of a bladed wheel, or impeller, and blow the air out through a shaft. These compressors are used primarily in cooling systems. Finally, jet compressors use either pressurized water or highly pressurized gas or vapor to force air outward from a cylinder called a diffuser. Jet compressors have no moving parts and are capable of producing great force.

More summaries and resources for teaching or studying Air Compressor.

Air Compressor from Gale. ©2005-2006 Thomson Gale, a part of the Thomson Corporation. All rights reserved.